It was a bittersweet weekend. The US Mountain Running Championships took place in North Conway, New Hampshire on Sunday and I wasn't there. After being off for 4 months at the beginning of the year, we didn't feel that I had enough time to adequately prepare in order to be competitive, especially with such an elite field.

I still wanted to run a national-class trail race without having to make a big trip out east. The plan at the start of the year was to compete in the Sportiva Mountain Cup races, but with my injury, I missed out on the early races that were closer to home. We chose to compete in the second to last race in the series, the Table Rock 27K which is hosted by Inside Trail Racing in Stinson Beach, California. This race was going to have solid competition and it was a chance to gain experience with a longer distance. Before I knew Caitlin Smith, the course-record holder and 2:41 marathoner, was racing, I thought my main competition would be Alison Bryant (La Sportiva) whom I've raced in the past at shorter distances.

We left Seattle early Friday morning and we were pulling in to Stinson Beach by noon. The town seemed oddly familiar before I realized that I had been there before on a day trip before running the 5K at Stanford in college. I remember my college friend, Alison Spiker, raving about the awesome lunch we had after our run along Highway 1. Tad and I were anxious to find the spot for lunch after our course preview.

While Tad ran up, I walked two miles up the infamous Dipsea steps that I would be running down the last mile of the race. My first thought was that these steps are hard to walk down, let alone alone run down, let alone race down. Afterwards we headed to the Parkside Cafe for a delicious lunch.  I got a beet and arugula salad-yum! I wanted to eat as many nitrates as I could. (Studies have shown the nitrates in beets to increase endurance.)


The next day, we drove to a different section of the course and ran a 7.5 mile loop on the beginning of the Dipsea trail and ending on the Coastal View Trail. Within the first mile I was nettled (see Enough Mettle to Nettle) . Then the trail opened up and we went from running on soft rooted forest trails to dusty scrubby hillsides. Coming around a turn I saw what I thought to be a bunny rabbit the size of a dog sitting in the middle of the trail. It turned out to be my first encounter with a jackrabbit. It took off and led us down the trail. Then we drove back to Stinson Beach to eat at the Parkside Cafe. I got a beet and arugula salad-yum!

Race morning (and the week leading up the race) I was more nervous than usual because this was going to be my longest race distance yet. Between my nerves getting the best of me and the hairpin turns on Highway 1, I couldn't stomach my usual pre-race coffee. I got to the starting line at 8:30 a.m., said hi to Alison Bryant, introduced myself to Caitlin Smith and we were off. The race starts with an 1,800 foot climb in 2.5 miles and then meanders its way back down to 20 feet before climbing again to 1,400 feet and then dropping to the finish. Caitlin went to the lead with Alison on her shoulder and I was a few steps back for the first half mile. When the climb got serious, Caitlin slowed and Alison took over. As the climb got steeper and tougher, we dropped Caitlin and started to pass the men that were walking. I was surprised that Caitlin was no longer a factor once we crested the mountain. I followed Alison at a comfortable pace until we reached the first aid station at 10K. I  didn't realize this whole time that Caitlin was chasing us down at probably 6-flat pace. I was caught with my pants down as she blew by. Tad yelled out, "Go with her!" I felt like Forest Gump when his teammate handed him the football and yelled, "RUN!" OKay!

I took off after her and the faster I ran, the further ahead she got. Before long I was all alone on a hillside with wind blowing sideways, thick fog and 50 switchbacks to navigate. At mile 11, my legs were shot. It took everything I had to keep running up the second climb. Alison told me later that she was running me down on the climb. Luckily, once I made it to the top, I got a second wind from the ice water at the aid station and got rolling again for the last 5K. The Dipsea steps turned out to not be an issue and I made it to the finish in one piece in a time of 2:25:31 with Caitlin about 6 minutes ahead with a new course record by two minutes and Alison just over a minute back.

I staggered into the shade, sat down and missed the quick awards ceremony. Whoops. Next time I will not assume that a competitor of Caitlin's caliber could be so easily dropped early on in a race. Well done, Caitlin!

A big thank you to race director Tim Stahler for a course that was well marked, challenging and beautiful. Inside Trail Racing events are definitely going into my race calendar. Thank you to all of the volunteers for your friendly encouragement and for the ice water at the last aid station- it was the best I've ever had. Thank you to Inov-8 for my Roclite 268's. They were FANTASTIC for this particular course. Loose gravel, wet muddy patches, lots of steps- no problem! 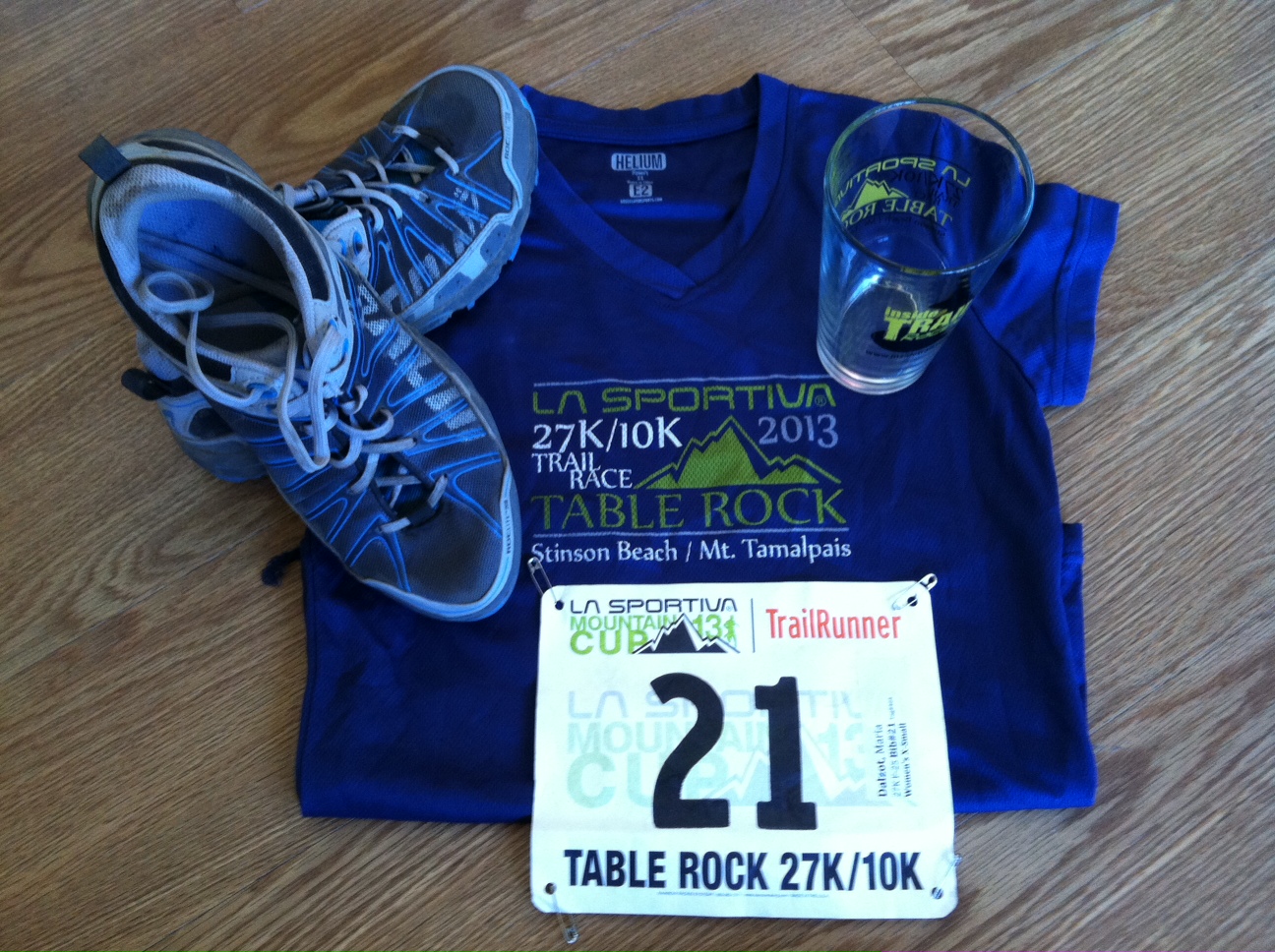 After a brief cool down and a change of clothes, we went back to Parkside cafe for the last time. Guess what I got... No way, I'm sick of beets and arugula! I got poached eggs with toast- yum!