I woke up this morning unsure of how my first race of the year would unfold. Of course, I would like to say that my training has gone seamlessly and without setbacks, but that is far from the truth. I am still struggling to get rolling and have consistently good workouts. I am still struggling with inconvenient aches and pains and tightness that interfere with any semblance of speedwork.

Add to that snowpocalypse 2017 and this winter’s training has been nothing to write home about. This week was especially frustrating because the Pacific Northwest got hit with another freak snowstorm. Six inches of snow at sea level made it impossible to run without slipping or pulling an adductor. I tried on Monday and aggravated my hip flexor. Between that pain and the ridiculous amount of snow and slush that accumulated, there seemed no way that I would race this weekend. The last thing I wanted to do was really injure myself and be out of the Chuckanut 50k, my debut at the distance, now only five weeks away. 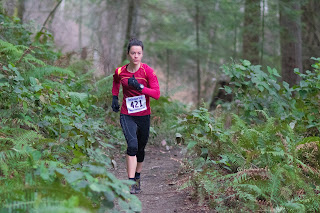 But on Thursday a weather miracle happened: a warm wind blew in and the temperature rose 20 degrees in a half hour. Then it started raining. The snow was melting at such a fast pace, sidewalks turned into streams and we could finally see the Prius. It looked like racing was going to be a possibility. Tad and I checked out the Fragrance Lake Half Marathon course on Friday for any remaining snow and ice. The trails were - amazingly - all clear. I was almost hoping they would still be covered so I wouldn't be able to race. Now, I had to make a decision when I wasn't confident in how I'd be able to perform. I planned to warm up for the race, see how my hip felt and then decide.

Today’s pre-race breakfast was fried eggs and potatoes. There is nothing that makes me giddier than a fried egg cooked just enough to have a beautiful runny yolk. As I cracked my first egg in the pan, I busted the yolk. Damnit! I was careful to not damage the second, but when I went to flip, I saw a steam of bright yellow ooze across the bottom of the pan. Nooo! My plate of eggs ended up being a complete mess. My immediate reaction was to assign a foretelling of the race to my eggs and think "this race isn't going to go well". I added salt and pepper and a roasted purple potato. It was delicious. It doesn’t matter that your eggs are not cooked to perfection or Instagram-worthy; they can still taste good. I left the table with this comforting thought and took it with me to the start line.

All systems were go after warming up and feeling oddly good for a change. After some course briefing from race director and 200-mile mastermind Candice Burt of Destination Trails, we were off. David Laney led the way, stringing the pack out quickly before starting the ascent up Chuckanut mountain. I started out per usual and let the crazies go screaming out to try to keep up with David. Once the climb started, I made my way into the men’s chase pack and worked with them up to Fragrance Lake. The recent storm left many trees down across the trail which required a quick decision to go over or under. My short legs struggled to get over the big ones and I had to use my upper body strength to pull myself over. But then there were some where I could stoop low enough to scramble under. Either way, it slowed things down but kept things interesting.

I felt strong from start to finish. I could switch gears efficiently and keep pushing without feeling any fatigue. Two weeks out from the race was a planned down week and the week before I scrapped my double days and workouts because of the snow so I was feeling the advantages of rest. It’s amazing; you should try it.  I actually passed and pulled away from two men on the Ridge. Those of you training for the Chuckanut 50k know how challenging the Chuckanut Ridge trail is so I was thrilled that maybe I’m finally getting the hang of it.

When I crossed the finish line I was stoked that my time was the same as last year despite the extra challenging trail conditions and being in worse shape. I am thankful that the weather cooperated and my body responded so well to treatments from Chris and Kerry that I could race. This was a big confidence boost, one I desperately needed going into the final weeks of training for the 50k.


I am also thankful that my yolks cracked because it is a good reminder that just because life isn’t perfect and running isn’t constant progression, doesn’t mean that the results can’t be good. The best thing I can do is believe and stick to my 2017 motto: let failure be an option. 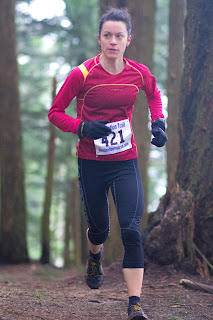 I want to give a shout out to my 2017 team of sponsors who continue to encourage me and support me on and off the trails, regardless of my performance. They believe in me as much as I believe in them.