Run for the Hills!

This weekend I was the first female to finish and was second overall at the Run for the Hills! Half Marathon put on by the West Virginia Mountain Trail Runners and The Mountain Institute in the Spruce Knob-Seneca Rocks National Recreation Area in West Virginia’s Monongahela National Forest.  For the Ultras (not me!) the half was Day 3 of the West Virginia Trilogy, a three day stage race that included a 50 kilometer run on day one, 50 miles on day two and 13.1 miles on day three. I have lived in West Virginia all my life, but have never been to Spruce Knob which, at 4,863 feet, is the highest point in the state and the summit of Spruce Mountain, the highest peak in the Allegheny Mountains. 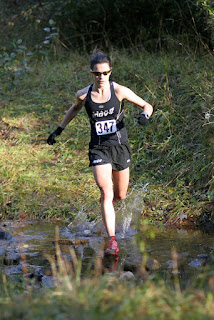 We stayed in Canaan Valley the night before so had a good hour’s drive the morning of the race. The weather was perfect in the upper 40’s and sunny. After a quick 2-mile warm up and a hug from my good friend, Phil, the race was off at 9:00 am. 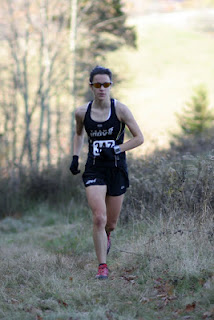 The race itself was a lonely one, not having anyone close by in front of me or behind me. I battled leaf-covered rocks and branches, climbed four barbed-wire fences and traversed four streams in my Inov-8 Roclite 285’s all while looking for orange ribbons located sporadically throughout the course. There were two out and backs during the race that allowed for encouragement from fellow racers and reassurance that I was not out there alone. I crossed the finish line in just over one hour and 40 minutes, which is 7 minutes faster than the previous course record. Having won the race, I was awarded with an awesome hand-crafted mug that was made by local artists.

I am very happy with my race, but also glad that I had the opportunity to visit such a beautiful part of West Virginia that I had not seen before. I will be leaving West Virginia in two weeks so this was a perfect opportunity for me to really appreciate the beauty and uniqueness of where I came from.  Having deprived myself during training and now having earned it, I get to celebrate with my last peanut butter and chocolate chip biscotti at New Day!